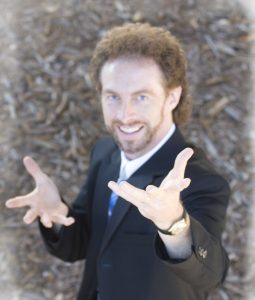 World Class Magical Talent
Based in the Heart of Illinois:
Magician Mitch Williams

For as long as he can remember, Mitch Williams has loved learning and performing magic and dreamed of becoming a professional magician.  As a child growing up in a small town in central Illinois, Mitch soaked up information in every book on magic he could find at the local libraries.  He built his own magic props and taught himself basic sleight of hand techniques.

After college, Mitch trained under world famous magician, Neil Foster, mastering intricate sleight of hand and stage showmanship skills, and graduating with high honors.  Afterwards, Mitch began developing his own original material and perfecting his own unique style of magic.  In his mid-twenties, he moved to Los Angeles to pursue his career as a magic entertainer, and soon became recognized as one of the top magicians in southern California.  He was soon invited to perform at locations throughout the United States and Canada, and in four other countries.

Mitch quickly developed a reputation among his peers throughout the world as a unique and highly talented entertainer. He became known as a “magician’s magician”, and his performing awards include the International Brotherhood of Magicians Stage Award of Merit, Bill Baird Award of Excellence in Sleight of Hand, I.B.M. Gold Medal Finalist, Society of American Magicians Stage Award and Gold Medal, and the Ben Chavez Memorial Trophy for Proficiency in Sleight of Hand. He’s appeared as a featured artist at numerous large regional and national “magic conventions” in Japan, Europe, and throughout the United States, and he has conducted in depth seminars for magic enthusiasts throughout the country on “how to approach magic as an actual art form”, all to rave reviews.

As an entertainer, Mitch has gained years of experience performing across this country and around the globe, for venues as diverse as television, cruise ships, revue shows, nightclubs, theatres, conferences, and corporate events. For more than twenty years, Mitch has used his unique and memorable programs to help corporate and other groups, from Beverly Hills to New York City and far beyond, to make their events incredibly successful, impressive, and just plain fun.

His performing credits in this country include Harvey’s Casino, Lake Tahoe; the Normandie Casino in California; It’s Magic show at the Variety Arts Center in Los Angeles; Brown’s Hotel, Loch Sheldrake, NY; Magic Island nightclubs in Houston and Newport Beach; Punchline Underground Atlanta; the Body Shop in Los Angeles; Wizardz nightclub in Universal City, CA; and he has been recognized as one of the favorite performers at the Magic Castle in Hollywood, the world’s most famous magic nightclub.

Mitch has been featured on the same bill with such notable celebrities as Doug Henning, Penn & Teller, Lance Burton, Elaine Booslier, Rosie O’Donnell, Marty Allen, Jeff Dunham, and Dennis Miller. And Mitch has also performed in Japan, Spain, Holland, Canada, and Mexico, and has appeared on television programs on Fuji-TV and NHK-TV in Japan and on the series, Aixo es Massa, on TV3 in Spain.

After spending ten years based in Los Angeles, Mitch returned to central Illinois, where he now resides.  In the Peoria, Illinois area, Mitch has become something of a local celebrity, regularly performing in local venues and appearing in all the local media, including as a regular guest on WEEK-TV’s morning news program, News 25 Today.

Mitch currently performs for a variety of corporate, private, and public events throughout Illinois and beyond. He thrives on bringing his diverse abilities to bear on finding creative solutions to meet or often exceed his clients’ expectations. He specializes in creating unique, customized event entertainment, speaking, and training programs that are designed specifically to meet the needs of each individual client.

For more information on how Mitch can make your events absolutely unforgettable and exciting for your guests, request your free information today.